If you’re into literature at all, then next time you visit London you’ll be in for a real treat as the capitol is filled with all sorts of history to do with writers, their novels and characters, as well as more recent adaptations.

Affiliate disclaimer: Where possible I have added links to products to help you find them – they may be affiliate links and if you buy through them I might get a commision – just so you know! Thanks!

Since London is the capital of England and the UK, it’s obvious that this would be the heart of all literature culture for the island. Almost every famous writer either lived in or wrote about London to some degree, so it’s the perfect place to explore if you’re a fan of anything from Sherlock Holmes to Harry Potter.

Where are the best book spots in London

If you’re arriving to London by train, chances are Paddington will be one of the stations you arrive at. The station became more famous due to Paddington Bear, when the book A Bear Called Paddington by Michael Bond was realised in 1958.

Paddington Bear has been in multiple film and television adaptations throughout the years, including the TV show from 1976-1980, and the Paddington films in 2014 and sequel in 2017.

If you’re ever at the station, make sure you head in to see the Paddington Bear statue by Platform 1, just by the second entrance to the Elizabeth Line.

If you are in London then make sure you head over to Westminster Abbey, as this is where many famous writers are buried or have a memorial, including Shakespeare, Charles Dickens, and the Bronte sisters.

To visit Poet’s Corner you will have to purchase tickets to enter the abbey, but you can also look around the other areas in the abbey such as the Royal Tombs and the Coronation Chair. On Sundays Westminster Abbey is only open for services, so bare this in mind when planning a visit.

If you’re a fan of Sherlock – whether from the books by Sir Arthur Conan Doyle, or you got into them from the BBC show with Benedict Cumberbatch, visiting the museum at 221B Baker Street cannot be missed.

The Georgian town house from 1815 is filled with all sorts of trinkets and furniture from the Victorian times (as this is when the original Sherlock books were written and set), and start to imagine what it would be like to be Holmes and Watson in the flat!

Where: 221B Baker Street, Marylebone

When you go to visit the museum, make sure you stop to see the Sherlock Holmes Statue too! Located just out front of the Baker Street tube station, you cannot miss this life-sized statue of The Great Detective.

While you’re out in Marylebone, make sure you stop by at Daunt Books – arguably one of the most beautiful bookshops in London. Even though the bookstore focuses mainly on travel and global history books, there is loads of children’s and fiction books to be found.

This bookstore is one of my favourites because it has a real old feel about it, especially with its wooden stairs, old banisters, and so many windows bringing in natural light too. Definitely make sure you check it out when you want to buy another book!

If you’re a Harry Potter fan, then you’ll know that these train stations are apart of the stories. Kings Cross is the main London station in the series – as this is where you would board the Hogwarts Express at Platform 9 3/4, and St. Pancras station is actually the building you see when Harry and Ron fly away in the car from the second film.

Although St. Pancras station doesn’t feature in the Harry Potter books, you’ll be in the right area to see it as both stations are actually right next to each other.

Inside Kings Cross station there is also a Harry Potter gift shop along with the luggage trolly photo area! There can often be queues so make sure you include extra time if need be.

If you’re interested in seeing other Harry Potter locations, make sure you check out my post on that too!

Just down the road from Kings Cross is the British Library, which has loads of events and exhibitions on all year round.

Make sure you check out the Treasures of the British Library exhibition, which has manuscripts from the Bronte sisters, Virginia Woolf and Sylvia Plath, as well as Jane Austen’s desk, and original writings from Charles Dickens.

If you’re familiar with the story of Sweeney Todd, then taking a trip to Fleet Street should be on your list. Although it is known as the Dundee Courier – as it was home to a Scottish publishing house, the original building of 185 – 186 Fleet Street is where the barber shop is said to be in the story.

Sweeney Todd, also known as The Demon Barber of Fleet Street, is the fictional serial killer who would murder his customers with a straight cut razor and then give their corpses to his partner-in-crime Mrs. Lovett, who then baked them into meat pies.

If you’re a fan of The Christmas Carol or Oliver Twist (or any other Dickens novels) then make sure you head down to see the home of Charles Dickens, which is laid out to recreate how it looked when he lived there.

The museum holds loads of different things to see throughout the five floors of the house, and even has an audio guide you can listen to in each room – so make sure you brings some headphones!

This Grade II listed pub situated in Fleet Street has been known for its literary patrons, such as Charles Dickens and Mark Twain.

The pub has been in the same location since 1538 and was rebuilt in 1667 after the Great Fire of London the previous year, so a good place to check out if you love old buildings! The pub was also alluded in Dickens’s book A Tale of Two Cities.

Just a few streets away from the Charles Dickens museum, outside the Great Ormond Street Hospital there is a bronze Peter Pan statue. Although not the kind of place to hang out at, it’s nice to stop by check out.

Updated for Jan 2023: I believe the store is currently closed for renovation work

The store that goes by the same name as the book: The Old Curiosity Shop by Charles Dickens, is an old building in the southern corner of Lincoln’s Inn Fields said to be built around 1567 and to have predated the Great Fire of London (which was 1666).

Although there is nothing in the book, which was published in 1840, that the Old Curiosity Shop actually existed as the “original” Dickens antique shop, as Charles states in the book that the building had been pulled down with a road replacing it. It’s believed that the building actually got its inscription “The Old Curiosity Shop” on the front around 1868, and it’s second addition “immortalised by Charles Dickens” between 1880 and 1890.

Although the store no longer sells Dickensian merchandise like it used to for many years, it more recently has become a shoe shop. None the less, it’s still a great place to stop by if you’re in the area.

Simpson’s in the Strand

Updated for Jan 2023: The restaurant is temporarily closed but does have plans to announce a reopening date in 2023

The Simpson’s in the Strand is actually one of the oldest traditional English restaurants, and has been previously a smoke room in 1828 and a chess venue in 1850, before being bought by the Savoy Hotel group.

This venue was also a firm favourite for Sir Arthur Conan Doyle, so much so that he included it at the end of his story The Adventure of the Dying Detective where Sherlock Holmes and Dr Watson dine at Simpson’s. The final quote is from Holmes saying “I think that something nutritious at Simpson’s would not be out of place.”

Shakespeare’s Globe and the original site of The Globe Theatre

A trip to London wouldn’t be complete without going to see the Shakespeare’s Globe. Originally built in 1598 and rebuilt in 1614 before being destroyed in 1644, The Globe Theatre is where William Shakespeare wrote many of his plays and showed them to a live audience. There is a plaque where the site of the Theatre was, and you can see some of the marking on the ground where the original foundations were.

In 1997 Shakespeare’s Globe was finally reopened 750ft away from the original site of the Theatre, after the journey had started out by American actor and director Sam Wanamaker in 1970. Shakespeare’s Globe still hosts many of the plays in action, as well as tours around the building.

These are just a few of the many bookish spots around London, what are your favourites? Let me know if I’ve missed any!

Pin me for later!

Alex has been practicing having a more low waste life for over five years while also trying to travel the world. She absolutely loves being able to share stories as well as tips on how to live a more sustainable life and finding secret travel spots. 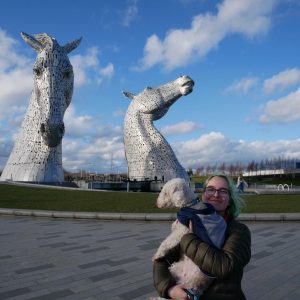 I’m 21 and I write about all things veganism, sustainability, and travel. I love all things to do with low impact and slow living, as well as food and crafts!

My aim is to make these topics become as easy and accessible for everyone, and I hope to help inspire many like-minded and young people to try new things.

This site contains affiliate links and as such any purchases or bookings made after clicking may earn me a commission.

As an Amazon Associate I earn from qualifying purchases.